The 'Babylon' singer/songwriter – David Gray is coming LIVE to Greek Theatre Berkeley on Friday 29th July 2022! For a night of pure entertainment, the groundbreaking artist will be performing a collection of his much loved worldwide hit songs as he celebrates an incredible 20 years since the release of White Ladder! Come and show your love and support and secure your place in the crowd for one of the biggest highlights of the Summer! The very best in music! 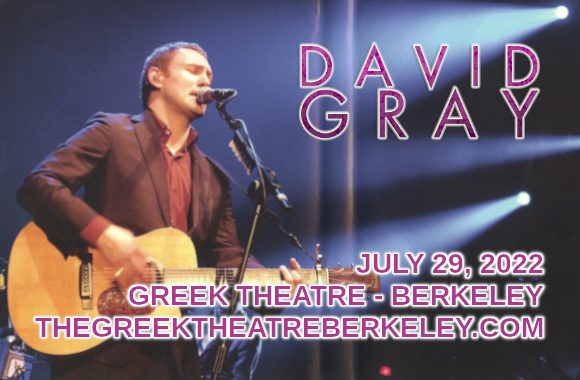 Everybody's favourite singer/songwriter, David Gray first came to light all the way back in 1993 as he released his groundbreaking debut, and then six years later followed it up with the record that has made his mainstream career – White Ladder! The album took the world by storm and included hit songs such as "Babylon", "This Year's Love", "Please Forgive Me", "Sail Away" and "Say Hello Wave Goodbye". These incredible tracks highlighted on David Gray's instantly recognizable sound as it crossed over the acoustic genre's and paved way to his long standing career that is still very much ongoing today.

White Ladder topped the charts in the UK and later he made it into the Top 17 in the US, the album was titled as the fifth best selling record of the entirety of the 2000's in the UK alone. Because of the widely accepted and highly praised album, White Ladder pushed David Gray into the limelight for all to see and gained him a four time nomination for the UK's Brit Awards.

Now an impressive twenty years since White Ladder was released, David Gray is still as popular as ever and continues to embark on world tours, spreading his joy and passionate music where-ever he goes. But as 2022 marks this amazing triumph in his career, David Gray will be taking to the road for a 20th anniversary tour – making his 2022 dates that more special!

Book your tickets for the night of a lifetime and experience David Gray's beautiful, catchy and iconic hits in an intimate concert setting! This will be an evening you will never forget!