Yasiin Bey, known to many as Mos Def, comes to Greek Theatre Berkeley on Friday 25th October 2019 for a very special performance of his seminal album Black on Both Sides in celebration of the record's 20th anniversary! Not only will the revered conscious rap artist perform the entirety of the album in a full headline set, but he'll be joined in support by a plethora of hip-hop legends, including Erykah Badu, Busta Rhymes, Slick Rick, Souls of Mischief, DJ Big Von and more! Unmissable for any hip-hop fan! 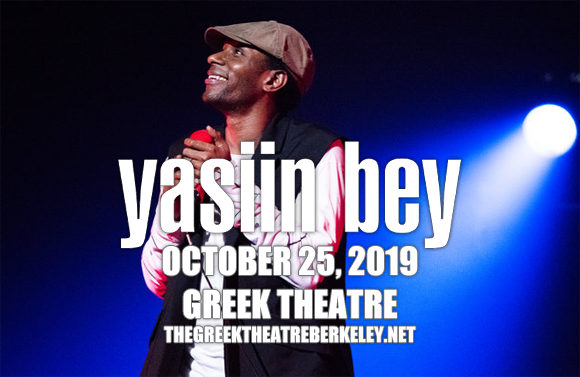 American rapper, singer, actor and activist Yasiin Bey is known by most under his stage name Mos Def. Beginning his music career in 1994, Bey briefly performed with the rap group Urban Thermo Dynamics (UTD) alongside his younger brother DCQ and younger sister Ces, going on to release his first and only album with the group, Manifest Destiny, ten years later. In 1996, Bey established himself as a solo artist under the Mos Def moniker, appearing on collaborations with De La Soul and Da Bush Babees, before he releasing his own debut solo single, "Universal Magnetic," in 1997. Bey formed Black Star with fellow rapper Talib Kweli in 1998, releasing the album Mos Def & Talib Kweli Are Black Star that year. Having signed to Rawkus Records in 1998, Bey released his debut album, Black on Both Sides, in 1999, followed by The New Danger (2004), True Magic (2006) and The Ecstatic (2009). He has been ranked on several Top 50 MCs of All Time lists, and has influenced several subsequent artists, including Lupe Fiasco, Jay Electronica, Kid Cudi, Saigon and Kendrick Lamar.