Legendary singer and songwriter Bob Dylan comes to Greek Theatre Berkeley on Sunday 14th June 2020 on his Never Ending Tour 2020! The iconic troubadour remains dedicated to life on the road and has regularly embarked on the tour since the 1980s, drawing from his varied and impressive body of work that spans nearly 60 years in the industry! Dylan will be joined for the 38-date leg by soulful Americana act Nathaniel Rateliff and The Night Sweats, and previous tour-mates the Hot Club of Cowtown in support! 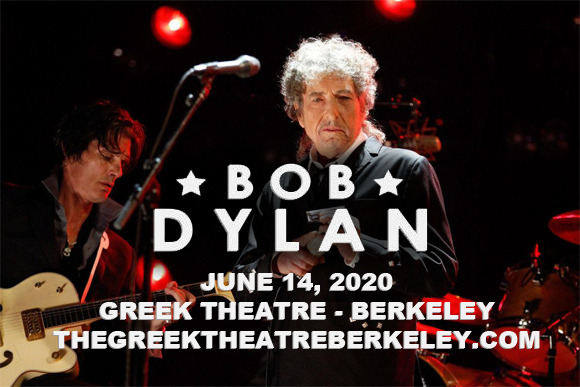 One of music's most beloved and revered songwriters, Bob Dylan was the voice of a generation, finding fame in the 1960s as a singer, songwriter, artist and writer, whose anti-war protest songs like"Blowin' in the Wind" and "The Times They Are a-Changin'" became anthems of the era. Wholly original and hugely influential, Dylan was the definitive folk-rock artist of the time, and his musical legacy is one that can still be heard in the up-and-coming acts of today. Famously, in the mid-1960s, Dylan began to incorporate electronic instrumentation in his music, which was condemned by many of his fans, but it was this change that led to many of his songs reaching the top of the US charts and the resulting albums (Bringing It All Back Home (1965), Highway 61 Revisited (1965) and Blonde on Blonde (1966)) have been lauded as some of the most significant rock albums of the 1960s. Throughout his career, Dylan has sold over 100 million records, making him one of the best-selling artists of all time. He has been the recipient of a number of prestigious honours, including 11 Grammy Awards, a Golden Globe Award, and an Academy Award, and in 2008 he was awarded a Pulitzer Prize for "his profound impact on popular music and American culture, marked by lyrical compositions of extraordinary poetic power." Dylan has been inducted into the Rock and Roll Hall of Fame, Minnesota Music Hall of Fame, Nashville Songwriters Hall of Fame, and Songwriters Hall of Fame. He received the Presidential Medal of Freedom from President Barack Obama in 2012.