Get ready to call your friends… maybe! as Carly Rae Jepsen takes on the wind as she embarks on the So Nice Tour this fall. She's stopping by to perform live at Greek Theatre Berkeley on Friday, 21st of October 2022. The sensational Canadian pop star recently dropped a new song "Western Wind" where she sets sail on chill vibes that bring listeners home. With a big new tour coming up, the "Call Me Maybe" and "Cut to the Feeling" singer has big surprises in store for her dear fans. So, get ready to feel the breeze as Jepsen fills the venue with her alluring vocals to lyrics that hit right home. Book your tickets now! 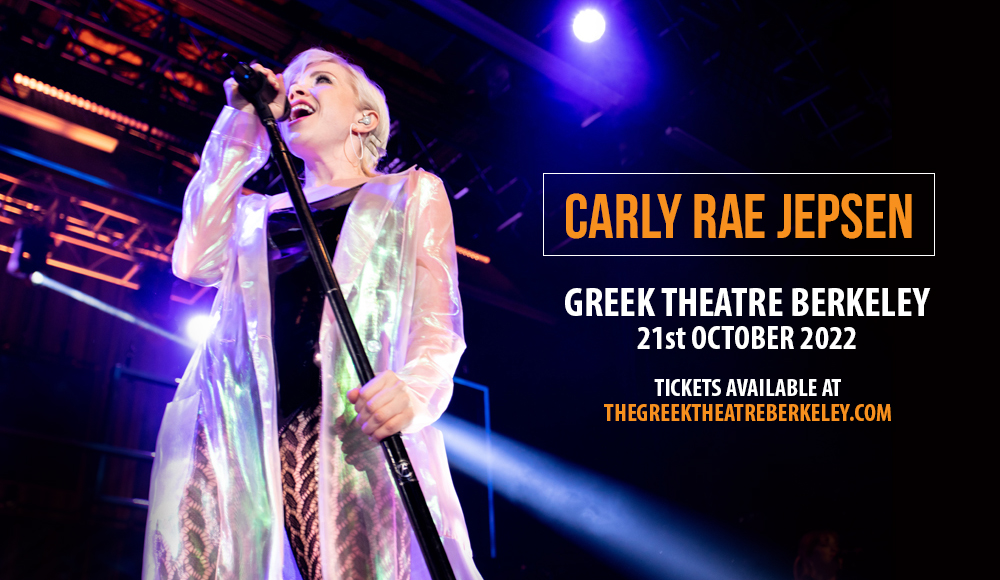 The voice behind sensational hit tracks "Call Me Maybe", "Good Time" with Owl City, "I Really Like You", and "Cut to the Feeling" is back on a brand-new tour after three years. “We’ve had the loneliest time… but after 3 years, the SO NICE tour is coming to your city,” she wrote on Instagram. Carly Rae Jepsen's back to meet her ever-so-loving fans and serve her signature alluring performances of her best hits and crowd favorites live on stage, and you can bet she'll throw in some big surprises.

The multi-Grammy Award-nominated pop singer hails from British Columbia, growing up with a passion for music. After graduating, Jepsen performed at open mics and wrote songs during her free time whilst working as a barista during the day. She auditioned for Canadian Idol and finished in third place.

She found her big breakthrough when Justin Bieber promoted her single "Call Me Maybe" on Twitter, and then a viral video with Bieber, Selena Gomez, Carlos Pena, and Ashley Tisdale lip-synced and danced to the track. At the time, the world soon found itself blasting the song on every speaker. The single stayed at #1 for nine weeks on the Billboard Hot 100. According to the IFPI, "Call Me Maybe" was the best-selling single of 2012 around the world.

From then on, Carly Rae Jepsen continued to dominate the global stage and amass a loyal following for her music that speaks volumes of relatability to every listener. Her follow-up hit singles include "Good Time" with Owl City, "Tonight I'm Getting Over You", "I Really Like You", "Run Away with Me", "Cut to the Feeling", and "Party for One".

She dropped her fourth studio record "Dedicated" last May 2019 featuring singles "Now That I Found You" and "Julien", and released "Dedicated Sibe B" featuring outtakes from her fourth album in May 2020.

With a new decade set for a big new era, Jepsen released a new song "Western Wind", debuting the track at Coachella in 2022. She sings "Coming in like a western wind/Do you feel home from all directions?".

With a breath of fresh air through "Western Wind", one can bet that Carly has some big surprises in store for fans following her So Nice Tour announcement. We'll just have to wait and see for now, but you definitely can't miss out on the So Nice Tour where the one and only Carly Rae Jepsen gets back on the stage on tour after three years. Book your tickets now!