Acclaimed singer-songwriter Matt Nathanson and multi-platinum, Grammy nominated artist Gavin DeGraw have announced a performance at the Greek Theatre Berkeley. Gavin’s album Make a Move came out on October 15, and Matt’s Last of the Great Pretenders came out in July. Perfect timing for these to music heavyweights to perform tracks from their latest albums! Get your tickets now! 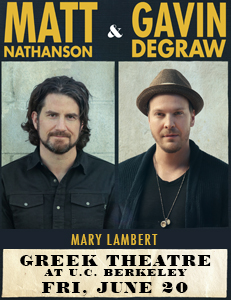 Gavin Degraw is an American Singer songwriter who has sold an astounding million records in the US. Known for incredible hits such as "Chariot, "Follow Through" I! don't Want To Be" and "Soldier". His powerful vocals are both unique and dynamic offering a broad range of different music. Gavin Degraw's third album, Free was released March 31st, 2009. DeGraw made FREE in less than two weeks at the Brooklyn studio of his producer Camus Celli, The first single, "Stay", was released through DeGraw's website on March 11th.

Matt Nathanson is a fantastic live performer, his heartfelt, deeply personal music often draws a unique connection to audiences. His last two albums Some Mad Hope and Modern Love are fan favorites and extremely popular. Which featured the hit "Come On, Get Higher.