Jason Isbell and The 400 Unit are headed to Greek Theatre Berkeley on Saturday 8th June 2019 on a joint tour with Father John Misty, who name-checked Isbell on his 2018 track "Mr Tillman"! The Grammy Award-winning Americana band and indie-rock singer-songwriter are a perfect pairing for those who like their shows full of danceable tracks with intelligent lyrics! Get ready for something very special indeed! 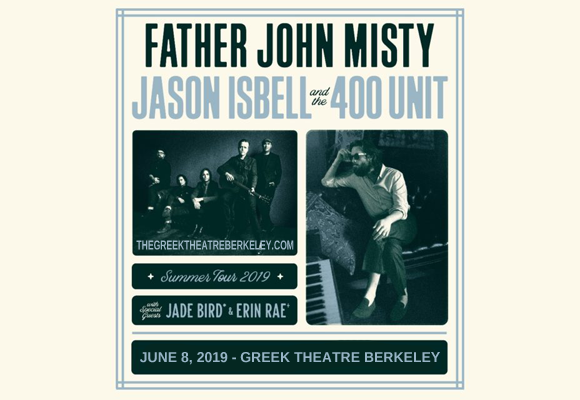 Four-time Grammy Award-winner Jason Isbell began his career as a member of the alternative country/Southern rock band Drive-By Truckers, who he performed and wrote with for six years, from 2001 to 2007. Isbell left the band to concentrate on a solo career, releasing his debut solo album, Sirens of the Ditch, in July of that year. Over the next two years, Isbell began to play and write with a backing band, The 400 Unit, with whom he released a self-titled album in 2009. Since then, Jason Isbell and The 400 Unit have released a further four studio albums and have made their name as one of the most popular modern Americana acts. In 2017, Isbell was announced to be the official artist-in-residence at the Country Music Hall of Fame and Museum.