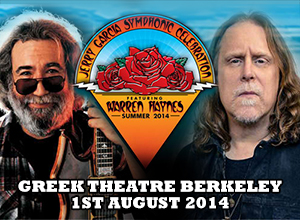 Rock music history books would not be complete without the life and times of Jerry Garcia and his legendary band, The Grateful Dead. His music career was built on experimentation, improvisation and exploration of sounds that helped shape the flower power era. Even in his death in 1995, his music flourished to new heights. Touted as 'radical even to Grateful Dead fans', Garcia's extensive catalogue will now be taken to a 'groundbreaking orchestral adventure'. The Jerry Garcia Symphonic Celebration is something that Jerry has envisioned and been working on until his untimely death.

“I’m very excited about doing these shows. We’ve chosen a very diverse list of songs from the extensive Jerry Garcia related catalog and in the true spirit of the original music will be leaving room for improvisation and approaching the symphonic arrangements from a non-traditional direction. We are also going to vary the setlists to some extent for fans that want to attend multiple shows,” says Warren Haynes, an equally accomplished and respected guitar-man (Gov’t Mule, Allman Brothers Band, The Dead), who is tasked to play with a live full symphony orchestra.

Stand up, be counted, and flash those peace signs! Bask in the kaleidoscope of sounds and enjoy this once-in-a-life rockestral experience. A must-see concert for Grateful Dead and Jerry Garcia fans out there! Get your tickets now!