Country rock five-piece Old Dominion are back on the road this year on the We Are Old Dominion Tour, coming to Greek Theatre Berkeley on Thursday 16th July 2020! They'll be performing from their long-awaited third studio album, Old Dominion (2019), and they'll be joined by Carly Pearce, who will open the show!

Old Dominion singer Matthew Ramsey said, "We are so excited for this line up. We've had the pleasure of playing shows and making music with both Carly Pearce and Dustin Lynch for years now. Dustin brings the heat like no other, and it will be amazing to have a female act as strong as Carly out there with us." 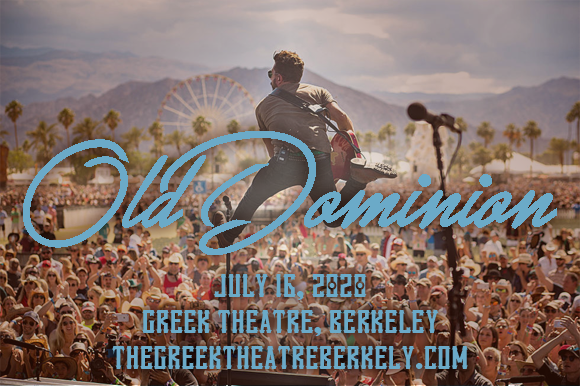 Musicality is a huge part of American country-rock band Old Dominion's appeal, so it's no suprise that each of the group's members began as a songwriter, making their living writing for a variety of high-profile artists, including Luke Bryan, Cole Swindell, Randy Houser, Kenny Chesney, Kelsea Ballerini, Blake Shelton and Dierks Bentley, among others. The band was originally a showcase for the material they were individually working on, but there was no denying the chemistry that occurred when the group came together and it soon began something much bigger. Making its debut in 2014 with a self-titled EP, Old Dominion's first album, Meat and Candy, followed in 2015, launching the singles "Break Up with Him", "Snapback", and "Song for Another Time". Two years later, the band released its second album, Happy Endings, two years later, hitting number one on the Country Airplay Charts. The group won the ACM Award for Vocal Group of the Year in 2018 – their second ACM Award to date, having won the award for New Vocal Duo or Group of the Year in 2016. A third album, Old Dominion, was released in 2019 and reached number nine on the Billboard 200.