Hitting the road again are one of the US' biggest reggae rock bands – Rebelution are coming to Greek Theatre Berkeley on Friday 4th September 2020 on the Good Vibes Summer Tour! Spreading the love everywhere they go, the four-piece are masters of getting a crowd going, so get ready to dance and groove to their fun-filled mellow tunes! The Grammy-nominated group will be performing a full headline set and they'll be joined by Steel Pulse, The Green, Keznamdi and DJ Mackle in support, bringing you the ultimate line-up for laid back summer fun! 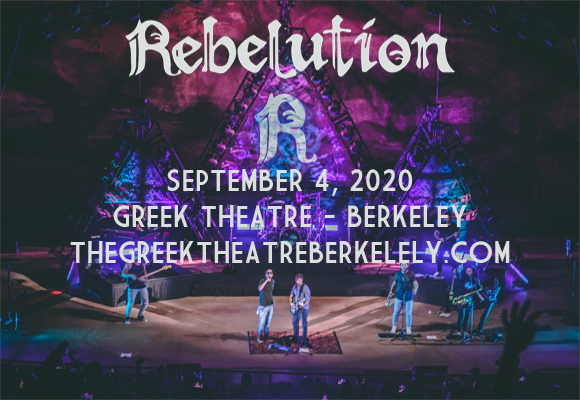 After meeting whilst studying at the University of California, Santa Barbara, musicians Eric Rachmany, Rory Carey, Marley D. Williams and Wesley Finley formed the reggae-rock band Rebelution in 2004. The friends spent the next few years building their fan base, performing both locally and nationally, and in 2007 they released their debut album, Courage to Grow. The track's lead single, "Safe and Sound", was played on heavy rotation at a variety of radio stations, including San Diego's 91X and Los Angeles's KROQ, which lead to the album reaching number four on the Billboard Top Reggae Albums chart. By the end of the year, Courage to Grow was picked as iTunes Editor's Choice for Best Reggae Album of 2007. Since its debut, the band has released six subsequent albums, which have all reached number one on the Billboard Top Reggae Albums chart. Count Me In (2014) was Billboard's Reggae Album of the Year, and the band's 2016 album Falling Into Place was nominated for a Grammy Award for Best Reggae Album in 2017. Their seventh studio album and most recent release is Free Rein (2018).