EVENT RESCHEDULED TO SUNDAY 2ND MAY 2021. Originally Saturday 3rd May 2070. All original tickets are still valid!

After the success of his top 10, platinum-selling albums There’s Really A Wolf (2017) and Zoo (2018), Russ dropped his eagerly-awaited third major-label album Shake The Snow Globe this January! Now, the hip hop sensation comes to Greek Theatre Berkeley on Sunday 3rd May 2020 on the Shake The Globe Tour, where he'll be playing tracks from the album, including the absolute banger "Best On Earth" featuring Bia, which Rihanna called her “new fav song!" Expect massive things from this prolific, no-holds-barred rapper as he continues to make moves in the rap world – he's blowing up and you need to see it! 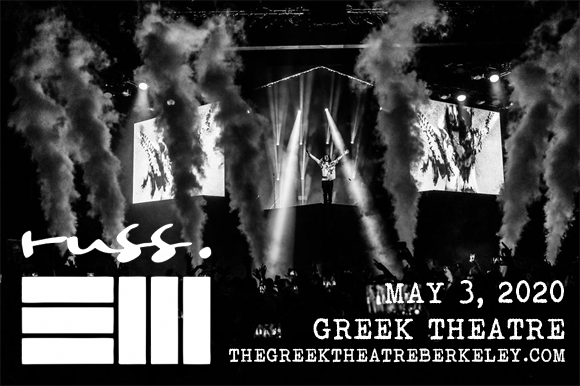 Not every story in the music industry is of overnight success, and with rapper, singer-songwriter and record producer Russ, it's years of hard graft that have got him where he is today. Finding his love of hip hop as a teenager, Russ put out his first track aged just 18, and over several years built a hefty online following on SoundCloud. In 2011, he appeared on MTV alongside Bugus, and he capitalised on his first taste of fame by releasing an incredible 11 albums and 87 singles consecutively through SoundCloud over the next three years, before upping the ante even further and releasing a song a week. Amongst the tracks he released, "Prosper", "Maybe" and "Lean On You"caught the attention of Capitol Records, who signed him to their label in 2016. The following year, he released his major-label debut, There's Really a Wolf, debuting at number seven on the US Billboard 200 and number four on the US Top R&B/Hip-Hop Albums charts. He found further success with his 2018 follow-up Zoo, which peaked at number four on the Billboard 200 and number two on the Billboard 200.