One of your favorite British pop stars is making his big comeback with a new personal and energy-fueled record up his sleeves. Fresh from the release of his sophomore album, Faith in the Future, Louis Tomlinson just announced his 2023 headlining tour of the same name. The new album features his new singles "Bigger Than Me", "Out of My System", and "Silver Tongues", exuding bravery and his newfound sonic direction. With a world to conquer, the man is stopping by for a show at Greek Theatre Berkely on Thursday, 29th of June 2023 to share his new record and biggest hits live on stage. Don't miss out on the Faith in the Future 2023 Tour by booking your tickets now! 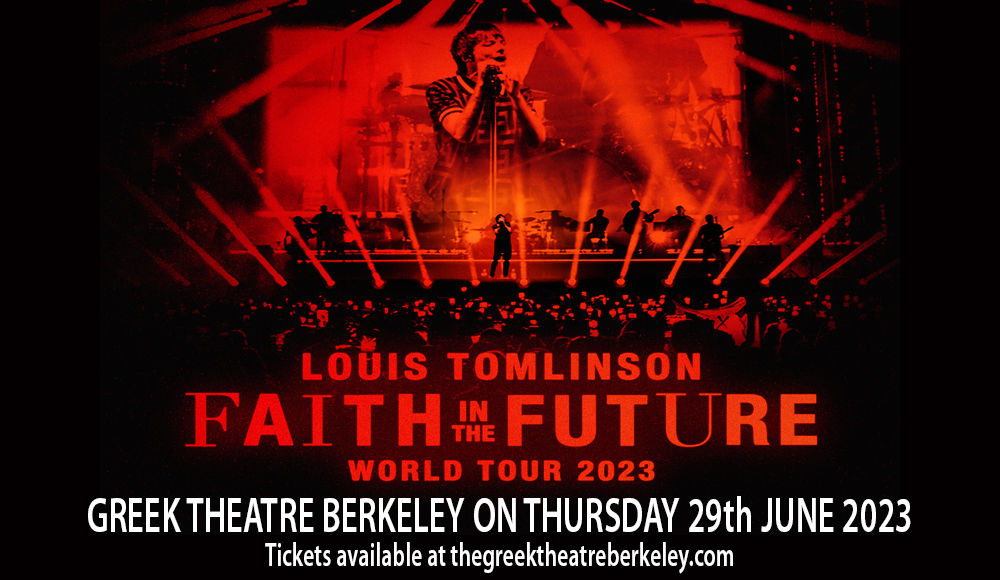 Dropping his new record "Faith in the Future" with newfound bravery and hope for the best to come, Louis Tomlinson shares its new singles "Bigger Than Me", "Out of My System", and "Silver Tongues", along with a big 2023 tour announcement. The man is stopping by several cities across the country, sharing his new songs and biggest hits live on stage.

"Really really excited to finally announce the North America tour," he shared on Twitter. "These songs were created for these moments and I can’t wait to share them with you!"

Driven by a mission to find his sound and embrace his artistry, the new record exudes authenticity and care in every single track, exploring energy-fueled tales of his own experiences. Faith in the Future is a sonic masterpiece in itself, truly a work of Louis Tomlinson, not going by musical trends, but telling raw lyrical tales that comes from the heart.

"I just wanted to embrace what I love musically," Tomlinson shared with Rolling Stone. "There’s a different kind of love for every song. It’s not all trying to be a single."

Faith in the Future features rock-fueled anthems that explore a different side of Louis Tomlinson. Talking about his new single "Bigger Than Me", "I realized from doing those live shows what it means to my fans and how everything I do is bigger than me." he shared. "It’s almost a coming of age for myself and putting opinions about myself to the back of my mind and thinking about what it potentially means for other people."

Formerly part of the global-favorite boyband, One Direction, before its indefinite hiatus, Louis Tomlinson also embarked on his own solo journey, just as his co-peers did. Experimenting with various sounds early on through his first singles "Just Hold On" with Steve Aoki and "Back to You" featuring Bebe Rexha and Digital Farm Animals, Tomlinson's musical direction was something of discussion among his listeners and fans. Releasing his debut studio album "Walls" in 2020, the artist faced a journey of finding his sound.

Following up his debut album, Faith in the Future is a testament of Tomlinson's bravery and dedication in embracing his artistry. His new songs are crafted to exude the kind of music he loves and wants to make, backed by introspective tracks that stay true to his heart.

"I’m just in a more confident place, so I’m willing to be braver and do things like that. Or at least what feels braver to me." he shared with Rolling Stone.